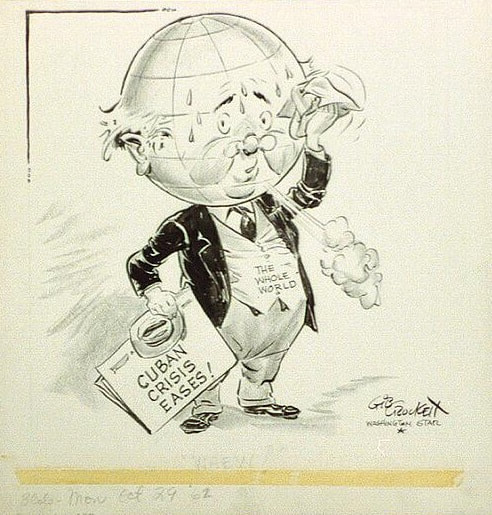 With the Cuban Missile Crisis done and over with, the world could finally take a break. Nuclear annihilation was subverted thanks to the careful diplomacy of both the Soviet and American leaders. In the end, the crisis showed the fragility of politics and how both the USSR and the USA used these weapons of mass destruction as political weights.

One problem during the Cuban Missile Crisis, which they found quickly during negotiations, was how long it took for word to be passed. A telegram from Moscow to Washington DC and back could take hours, days even. As the negotiation between Dobrynin and Kennedy proved, effective negotiations could only take place when word was instant. Both the Premier and the President knew that instant communication would aid them greatly in treading the fine line between nuclear war and peace. Thus the Washington-Moscow hotline was born.
Crockett, G. (1962, October 29). “Whew!” [Cartoon] Washington Star. Retrieved from the Library of Congress,
Powered by